An original path to the summit, the Watkin Path has the most height gain. A scenic walk through old quarry and mine workings on a good path. Much steeper as height is gained and the final ascent on Snowdon’s SE slopes is steep and loose in places.

Park appropriately in the Snowdonia National Park car park at Pont Bethania. There are public toilets and pay and display machines here. You may notice signs to the local Caffi Gwynant, in a converted chapel on the opposite side of the road. An excellent place for tea and cake (or more!) on your return.

To reach the start of the path, follow the main road to the left from the car park, over the bridge and cross the road. To the left of the entrance to the National Trust's farm and campsite, Hafod y Llan, you will see a ‘Llwybr Watkin Path’ stone pillar and stone steps leading into the woods. 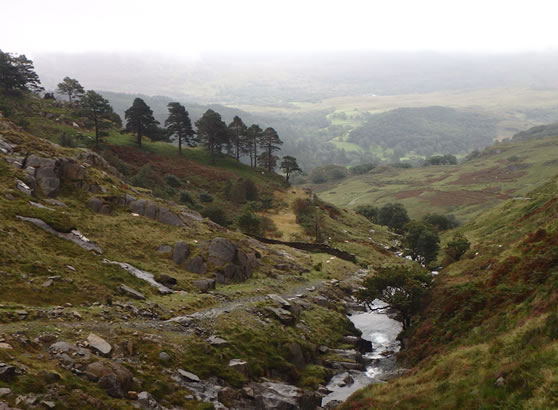 These woods are a lovely example of native oak woodland, part of a larger wooded area that stretches down to Porthmadog. You will see bluebells and wood sorrel, among other flowers, depending on the time of year.

Follow a good path round and up onto a definite ‘bowl’ shape and notice the aptly named ‘Castell’ rock feature, now behind you and what you have just walked around on the path. This must have served as a very good lookout post for King Arthur’s knights!

Look to the mountain skyline and you’ll notice a large cleft in the steep slope, Clogwyn Brith, to your left.

This gap was cut into the rock to allow a tramway to be built, to take wagons full of slate from the South Snowdon slate quarry down to Pont Bethania, where they were then transported by cart to Porthmadog, and then out to sea. You’ll cross the old tramway on your way up to the final ‘mountain gate’ that denotes you’re onto open access land.

You’re on a well-made path now, with large rocks laid into the slope and you can’t help but now notice the fine waterfalls to your right. If you’re interested in seeing the waterfalls a little closer up, there is a narrow path that descends from the gate.

This takes you down to a slate bridge, crossing the stream. A popular place to picnic on hot, summer days (please take any litter home with you again).

You’ll welcome the point at which a flattening is reached, just at the lip of the impressive waterfalls. There is a path junction here, where a smaller path leaves the Watkin Path to ascend towards Bwlch Cwm Llan and Yr Aran. The wide path you need will carry on, further into Cwm Llan.

You may also notice a small intake weir of the National Trust’s hydro-electric scheme in the river here. When the river is flowing well, a percentage of the ‘above average’ flow rate is used to drive turbines in the valley, creating the equivalent energy for approx. 445 homes each year. 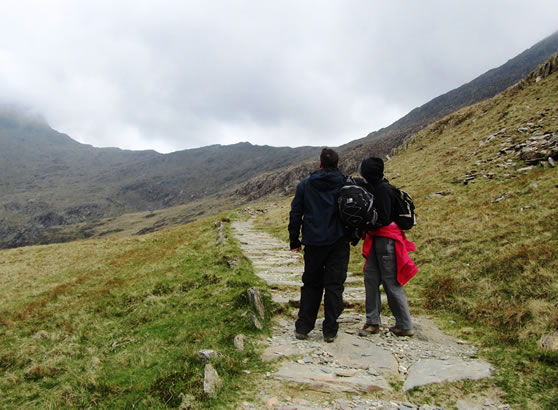 As well as this more recent addition to the landscape here, your journey along the Watkin Path will also take you past old copper mining buildings of the Hafod y Llan copper mine. The copper mines themselves are up above on the slopes of Y Lliwedd on your right.

You will pass sheep pens made of traditional slate fencing on your right, and then the ruins of Plas Cwm Llan – which used to be the home of the south Snowdon slate quarry manager. During the second world war, soldiers used this building as a target for gun training.

The holes that you can see in the walls of the house are bullet holes. Who’d have thought you’d see so many examples of historical uses of this area, while walking on this path! The ground is now very flat and this section of the walk gifts you pleasant walking through sheep and cattle grazing land. 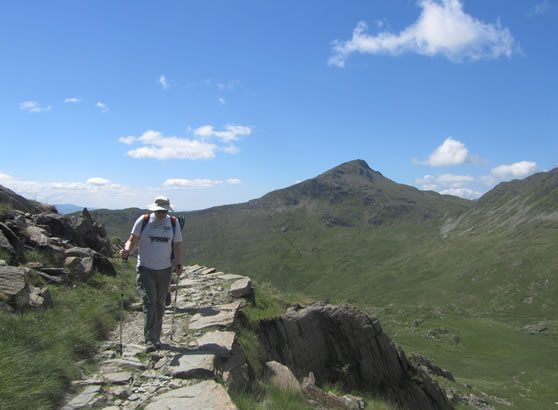 Another five minutes on, and you will pass a rocky outcrop, Gladstone Rock, with its stone plaque commemorating the opening of the path to the summit.

The Watkin Path was the first ‘designated summit path’ made with the sole intention of walking to the summit, for ‘tourists’.

It was opened in 1892 and the crowd that stood around the then prime minister William Gladstone, was a large one. You can imagine this was a good place to address them all.

As you reach the head of Cwm Llan, you’ll notice the steep slopes of Yr Aran to your left and Snowdon’s south ridge looming above you. In this sheltered spot lies the remains of the south Snowdon slate quarry workers’ barracks.

This is where the Watkin Path starts ascending again, quite steeply, away from the barracks and towards Bwlch Ciliau. All the while the hollow of Cwm Tregalan lies to your left and rising to your right are slopes leading up to Y Lliwedd.

While taking a moment’s rest, on this steeper section, turn around for wonderful views back to the shapely peak of Yr Aran and towards the Glaslyn estuary and Porthmadog beyond. You’ll notice the path is getting rockier now, and steep at times, as it zig zags its way to the ridgeline.

It’s always a treat to reach this ridgeline, Bwlch Ciliau, in clear weather as you gain an appreciation of the ‘other side’ of Snowdon and views down to its lakes, Glaslyn and Llyn Llydaw, as well as over towards Crib Goch and Carnedd Ugain.

If you were to turn right here, you would ascend Y Lliwedd, which is the final peak on a Snowdon horseshoe traverse. Follow the Watkin Path to the left. The path weaves in and out of craggy rocks and you can take numerous opportunities to wander along these to take some impressive photos. 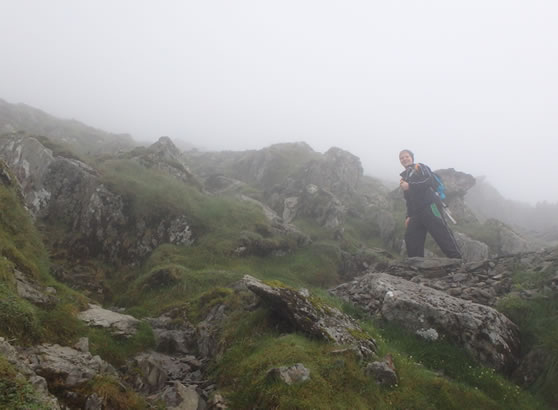 Take care of the 600m drop beneath this edge, though, down into Llyn Llydaw. There is a delightful grassy area, just before the final steepening to the summit ridge. Take a moment to sit here, have something to eat and drink to give you some energy for the final summit push!

This area is called Bwlch y Saethau (Pass of Arrows). According to legend, it was here that King Arthur fought with his own treacherous son, Mordred, and was struck by arrows from Mordred’s army. A dying King Arthur was taken down to Llyn Llydaw below and his army found a cave underneath Y Lliwedd to wait in, until such time King Arthur would rise again for battle. Are they still there?

Now leaving Bwlch y Saethau, you pass a ‘Watkin Path’ stone pillar and reach the most difficult part of the Watkin Path. It is steep in places, and care must be taken as it is very loose underfoot, caused by the current path eroding away in places. The path weaves in and out of rocky outcrops but is nowhere difficult. 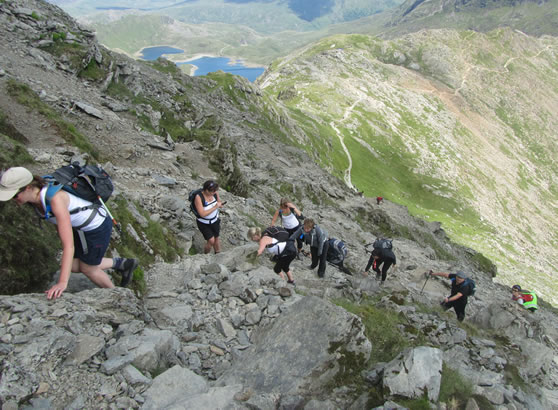 If the way is becoming too steep and rocky, you may have wandered too far right so keep trending left around these obstacles and a path does slant its way diagonally up to Snowdon’s south ridge above you.

The BMC (British Mountaineering Council) recently identified this section of path as needing financial support for improvement, in its Mend our Mountains conservation campaign.

Small, safe steps and you will shortly reach a standing stone that marks the spot where the Watkin Path joins the Rhyd Ddu Path. From here, the path continues to climb and it feels like the summit will never appear, but as you ascend through boulders and follow the rocky path, the windows of the summit building will suddenly appear... you are now nearly at the summit of Snowdon!

On a clear day, there will be tremendous views to the south, towards Porthmadog, and the north west towards Caernarfon, the Irish Sea and Anglesey.

On a busy day, you can sometimes queue for a climb up the steep steps to the actual summit. It is a must, though, so make the opportunity to visit the very top of the highest mountain in Wales (and higher than any mountains in England, too!).

Make sure you have extra layers to put on in colder/windier/wetter weather and do take on board more food and water.

You are only halfway and you’ll need energy for the descent, too!

On the way down, it is important to remember that the Watkin Path does not descend directly from the summit...

It starts from the standing stone which is approximately 200 metres down the Rhyd Ddu Path, which is the stone pillar you met on your way up. 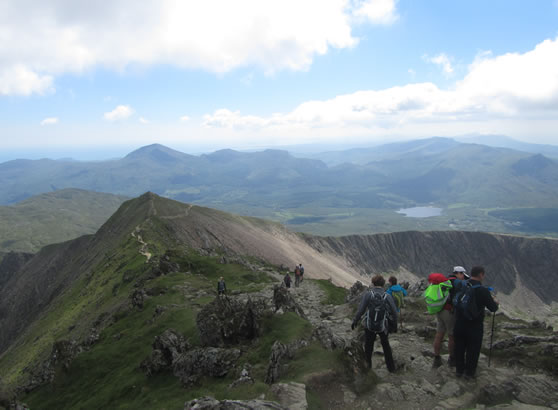 You have an option to follow Bwlch Main and the South Ridge all the way to Bwlch Cwm Llan if you do not want to descend the steep path section on the upper Watkin Path. Do check a map to make sure you know which ridgeline you’ll be following, and to make sure you don’t follow the Rhyd Ddu path by mistake.

Always keep to the ridgeline with Cwm Tregalan on your left and descend back into Cwm Llan via the lowest point before re-ascending to Yr Aran.