The Miners' Track is ideal if you wish to take a walk on Snowdon without going all the way to the summit. The path starts off wide and even, climbing gradually becoming a hard climb towards the intersection of the Miners’ and the Pyg Tracks.

One advantage of starting at this point is that you are already 359m above sea level. The path starts at the far left hand corner of the Pen y Pass car park, opposite the entrance (as you stand with your back to the road). There is now a newly commissioned metal gate to the path, which shows an outline of Snowdon’s Y Lliwedd ridgeline above Llyn Llydaw. 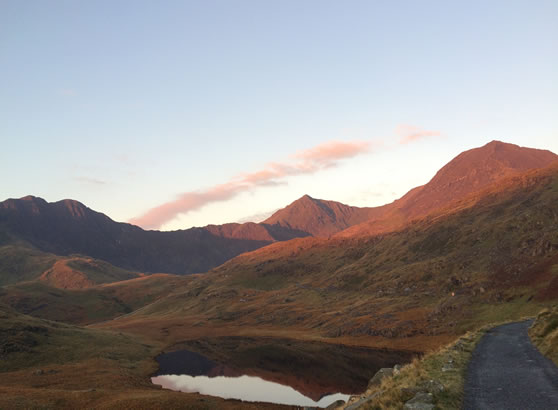 As you walk along a fairly easy angled engineered path, enjoy the fantastic views of the Nant Gwynant valley down to the left from the path.

Five minutes on and you will pass a small lake on your left, Llyn Teyrn (Lake of the Tyrant...but who?!) Look out for the ruins of the old miners’ barracks near the shore steeply below you.

The pipeline you can see leading down the valley on the left supplies water from Llyn Llydaw to Cwm Dyli hydro-electric power station in Nant Gwynant (valley to your left). The power station, which is the oldest power station in Britain, was originally built to supply electricity for an electric railway through the Gwynant Valley. The railway would connect slate quarries and mines, but scheme was abandoned when it ran out of funds.

The power station was commissioned a year later in 1906, and has been supplying electricity to the National Grid ever since, and now remotely via a larger plant in nearby Dolgarrog. The path forks near the shore of Llyn Llydaw (left takes you up towards Y Lliwedd). Keep right and you will reach a causeway crossing across the lake.

Before the causeway was built, horses and wagons full of copper from the mine were carried across Llyn Llydaw on rafts, to shorten their journey down to Pen y Pass. But following an accident in which a horse drowned, in 1853 it was decided that a causeway was to be built.

In order to build the causeway, the water level had to be lowered by 12ft, and during that process a prehistoric oak dug-out canoe was discovered – proof that man has roamed Yr Wyddfa for thousands of years.

Cross the causeway and pass the ruins of the Britannia Copper Mine crushing mill on your right, before a steep climb to Llyn Glaslyn. Here, you’ve walked two miles.

This grand building housed the large crushing hammers that were used to extract the valuable ores from surrounding rocks. 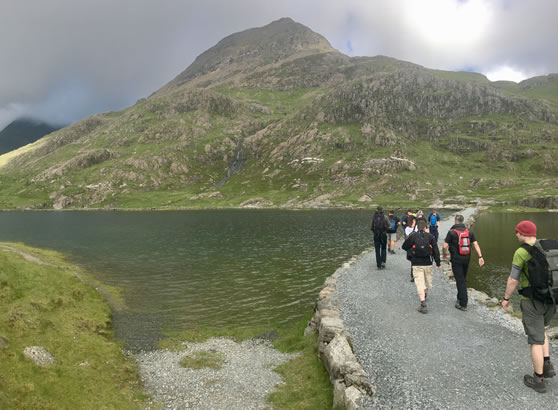 Copper ore was taken down to the crushing mill by an aerial ropeway over Llyn Glaslyn; this reduced the distance the copper had to be transported, and avoided the steep climb between the two lakes. The very first ‘Zip Wire’ on the mountain?!

From Glaslyn (Blue Lake), look at the dramatic view of Snowdon rising almost 500m above the glacial lake. As you walk around the lake, you will pass the ruins of another row of barracks on your right, where the miners used to stay during the week. From Glaslyn, although you have walked almost three quarters of the route in terms of distance, you are only half way up the mountain, time wise.

From Glaslyn, turn right just after the barracks at a finger post, and follow a well pitched (laid stones) path that zig zags up the slope. This part of the route is a hard climb and look out for bands of quartz underfoot, which can be slippery when wet. Taken nice and steady, this steep section will take about 25 mins to walk up. 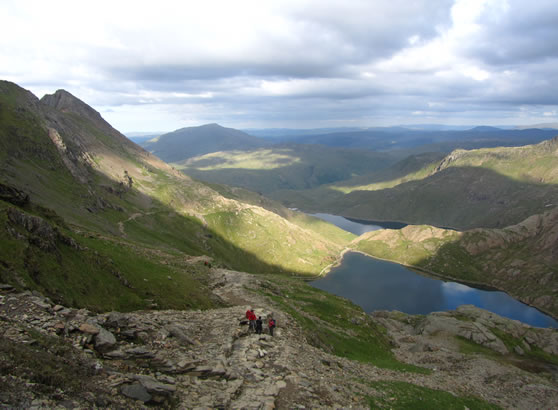 Keep going, on steep pitched steps – and you will reach a tall standing stone that marks the junction with the Pyg Track (look out for it on the way down, if going down the same way).

From this point the path continues to climb steeply to Bwlch Glas, including a few places which need hands to steady you on the rocks. This part of the path is known as Llwybr y Mul (mule’s path). Before the main road through Llanberis Pass was built, this path was used to carry copper up to Bwlch Glas and then down the other side to Llyn Cwellyn.

As you approach the Zig-Zags, look out below to spot the open copper mine shafts on your left.

One last set of steep zig zags and you’ll emerge onto a flatter section of ridge, Bwlch Glas. Bwlch Glas is a busy place as two other paths join here (the Snowdon Ranger and Llanberis Paths). You will see railway tracks running up the mountain along the right hand side of the path.

This is the Snowdon Mountain Railway, which has been carrying visitors to the summit since 1896 on the only public rack and pinion railway in the UK. Trains run from Easter – end of October on good weather days.

If the train is running, then the top Visitor Centre will be open. If trains are not running (poor weather or out of season) then the centre will be closed.

Take in the views from Bwlch Glas, then bear left from the standing stone. You are now on the final leg of your walk up Snowdon. 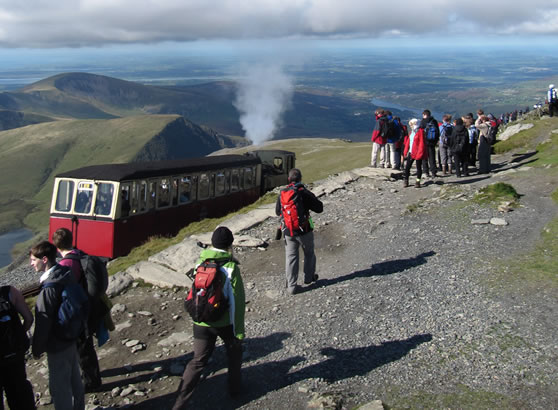 Walking at a leisurely pace, you can expect to be on the summit in under 15 mins. From the summit on a clear day you will be rewarded with fantastic views. Sometimes (just sometimes!) you can even see as far as Ireland, the Isle of Man and the Lake District.

To descend the same way you will retrace your steps to Bwlch Glas, but make sure you have an eye on your direction of travel as Bwlch Glas can be a confusing place on a busy day or poor weather as lots of paths converge at this point.

At Bwlch Glas there is a tall marker stone with ‘Pyg Track’ on it and this stands at where the final steep zig zags emerge on to the flat plateau area. Follow this initially, and remember to look out for the standing stone for the Miners' Track, after approx 35 mins of walking from Bwlch Glas (average pace).